At the Western Wall, on the way out, everybody wanted a picture with the graduating soldiers.

We’d visited, and prayed, and cried a lot. With God’s help, these young people protected us, and all the other visitors, too.

The approach to the Wall is dramatic and powerful.

But when you leave in the dark, things start to get a little bit scary.

Israel is a free country; freedom is not the issue.

In the Arab shuk (market), the shopkeepers sold both non-Jewish and Jewish religious collectibles. It was scary and unfamiliar but they treated us fine, even though we dress Jewishly.

I got the distinct feeling that the conflict here is principle-based, not personal.

Here is the thing: I fear the Jews have bigger fish to fry.

Believe it or not, I worry that we are a greater danger to ourselves than our avowed enemies are.

The #1 problem is materialism, scraping away at our souls.

Here is a shop that stands in a newish lavish shopping mall, playing Western pop hits, that stands just outside the Wailing Wall area. 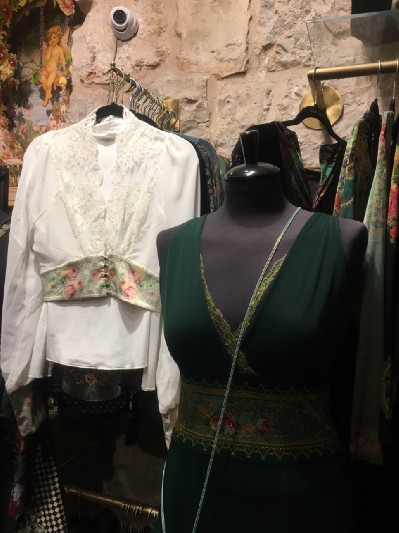 Problem #2 is slavishly copying American brands and culture. Israelis in Jerusalem have their very own kosher McDonald’s.

In Tel Aviv as in the holiest city in the world, there is an overwhelming plethora of imported Americana.

What is the future character of the Jewish state?

Problem #3 is sexual immorality, of which there were odd hints.

I saw drawings of male genitalia scrawled on the parking garage wall, and in the Old City, near the Wall. There was sophisticated gay art in the shopping mall as well.

In a surplus Army clothing store, there were playing cards depicting nude women.

In America I would say that none of this is out of the norm, and it’s life and it’s commerce and who cares?

In Jerusalem the sight of these things left me feeling perturbed.

Problem #4 is fading consciousness of the Holocaust, despite educational efforts integrated with the fabric of ordinary life.

The mall just outside the Western Wall, for example: Its walls are made of brick. There are letters and numbers like this written on the outside.

The detail brings to my mind (and others in the family) the numbers branded onto Jewish prisoners’ wrists at the concentration camps during the Holocaust.

In reality, the numbers have nothing to do with that; rather they are an architectural flourish with a completely different meaning.

Nevertheless, it is the image that matters to me. As Hitler’s terrifyingly unopposed and nearly totally effective attempt to wipe out my people has a lot to do with my foundational belief that Israel, as a state, must exist.

But then again, not for all — not necessarily. I don’t know to what extent the ultra-Orthodox Jewish community here is moved to nationalism by the Holocaust.

I don’t know how much the younger generation thinks about it.

Here is something I seriously like about Israel: plentiful kosher food. Meat.

All without hate and shame.

And there are so many kinds of yarmulkes a man can choose from.

Symbolizing that you can be a lot of different kinds of Jew, and it’s fine.

We all, or almost all, have a special reverence for the Lubavitcher Rebbe, of blessed memory.

But I am a visitor, so here is problem #5: Are the Jews who live here, the holiest place on earth, maybe a little bit jaded?

I don’t know. I can’t answer that question, but I think that it would happen to me.

I think that ordinary people, working hard and struggling to make ends meet, struggle always with faith in God.

Israel is a place of unbelievable meaning. People flock here. They do. It’s like drinking water for the soul.

But for Jews to keep Israel, we need to keep our values and morals alive.

Holiness, the sacred — not just vague pangs of conscience — living in some sort of agreed-upon national Jewish way — needs to seriously matter.

A good example is the Sabbath. For the Sabbath, Israel visibly shuts itself down.

But aside from the ritual, how do people feel inside their hearts?

Again, I really don’t know. But it is the not knowing that worries me.

One lady in Tel Aviv tried to give me directions to Jerusalem, but admitted she only drove when she made the trip.

So she asked the other guy in the store. And he sort of made a gesture, as if to say, “Nah I don’t go there — and why would I?”

That, right there, is the existential threat to the State.

That is what we need to fight for.

That, and not only to vanquish omnipresent Arab military threats and the accompanying propaganda.
_____

All opinions my own. Photos by me. Updated 12/26 to note that the numbers on the walls of Mamilla, the shopping mall, are not related to the Holocaust. Thanks to my friend Melissa Danto Rayman for pointing that out.

I write about the things that matter to me. All opinions are my own. All individuals are considered legally innocent until proven guilty in a court of law. Public domain.